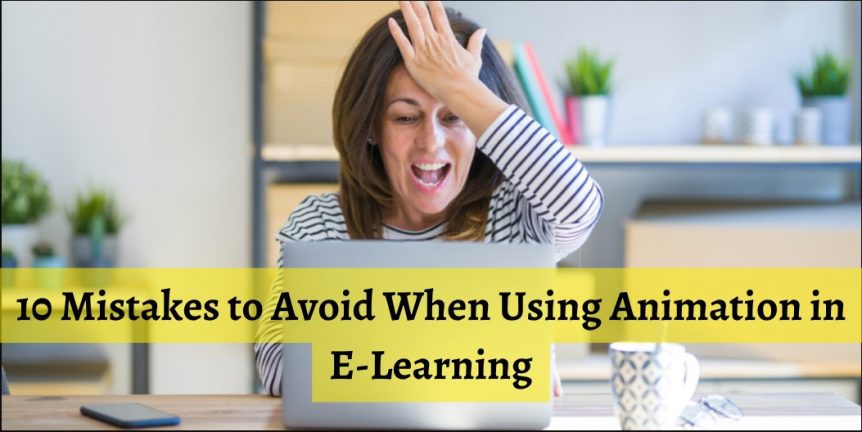 In e-learning, animations are highly effective tools for explaining topics and concepts, including those that are complex. They are also an excellent way of varying the content you present to learners, including to break up text.

While they offer a lot of benefits, animations must be carefully created to ensure they have a positive impact on the learner experience and the objectives of the training course. Carefully creating e-learning animations involves avoiding common mistakes, including the following.

The best animations are fast-paced and to the point, so making an animation long or complicated will not work. Instead, animations should be short, clear, and, ideally, focused on a single issue or concept. The more you try to pack in, the longer, more complicated, and more ineffective the animation will become.

Mistake 3 – Going Overboard with the Design

The animations included in your corporate e-learning courses need to be well-designed and professional, but they don’t need to be Pixar or Disney-level quality. It’s also important to avoid including too much design in the animation, as that will be a distraction to learners. You have to get the right balance between simplicity in design and meaningful content but avoiding going overboard is a good principle to follow.

The design of animations should match the overall design of your e-learning course. In other words, the transition between the animation and other elements of the course should be seamless. This includes areas like colours, tone, style, and fonts.

Mistake 5 – Creating Distractions for the Learner

You should be careful to avoid including elements in e-learning animations that will distract the learner. This is an important point to remember, as there are a lot of elements that you could potentially include. This includes content and design elements, as well as voiceovers, text, motion, statistics, and more.

For example, including text on a screen that is also being read in the voiceover could be distracting for learners.

Mistake 6 – Not Tailoring the Animation to Learners

Tailoring your e-learning course to learners is an important general point, but it has added significance in relation to animations. This is because animations can sometimes come across as simplistic at one end of the spectrum and overly complex at the other. Tailoring the animation to the audience will help to avoid this.

Mistake 7 – Trying Too Hard to Be Funny

It is difficult to effectively include humour in e-learning courses – this applies to animations as much as it does to other types of content. Jokes and other potentially humorous elements can be taken the wrong way, or learners might not understand them. Even though it might feel natural to include humorous elements in an animation, it is usually best not to.

Mistake 8 – Using Too Much Text

Including text is common in animations, and text can often be beneficial. Text can help clarify a point, for example, or explain a concept or context. However, text within the animation should only be used when it is adding value, and it’s important to avoid including too much. When there is too much text, the learner will be busy reading rather than watching, making it more difficult to take in the other elements of the animation.

Mistake 9 – Not Including Audio

Animations are a visual content element, but audio plays an important role in the effectiveness of e-learning animation. Audio can enhance the learner experience, for example, by helping to explain the topic through a voiceover. You can also use sound effects and background music to make the animation more engaging and interesting to watch.

For example, a cultural reference you include in an e-learning animation might make perfect sense to an employee in the UAE or Saudi Arabia. However, that same cultural reference could baffle employees in other parts of the world. Leaving out cultural or local references is usually the best approach.

There are several best practices and tips that should be followed to ensure your e-learning animations are as effective as possible. A good starting point, however, is to avoid the 10 mistakes outlined above. Avoiding these mistakes will improve your e-learning course and help achieve your goals.