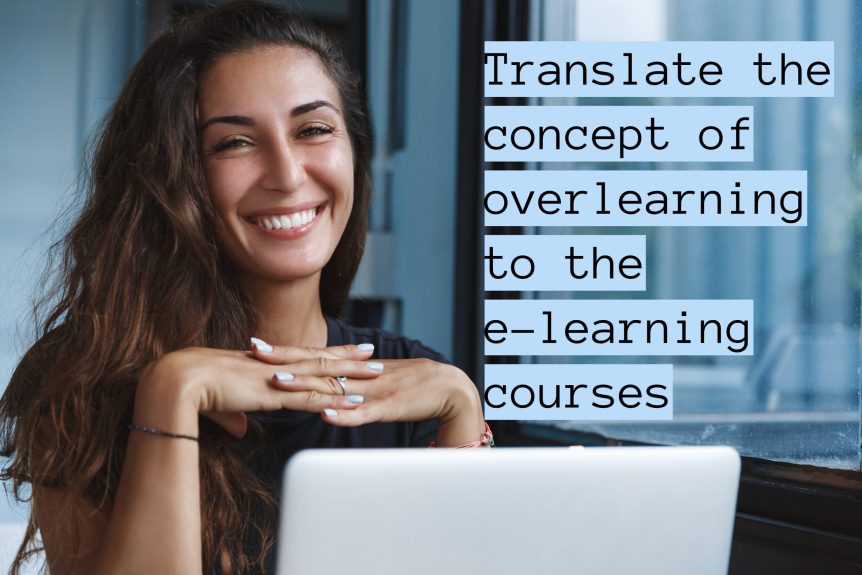 Usually doing something too much – over-eating, overtraining, oversleeping – is not a good thing. When learning a new skill, however, overlearning is very beneficial. It results in you being able to perform tasks without having to think too much about what you are doing, and it helps prevent you from forgetting how to complete tasks.

How can you translate the concept of overlearning to the e-learning courses you develop?

Before going into those practical specifics, let’s first look in more detail at the concept of overlearning and what it means.

With overlearning, mastering or learning a skill is not the goal. When a learner masters or learns a new skill, understands a new concept, or acquires new knowledge, all you truly know is that they have the capability at that moment.

However, you don’t know much about their capabilities in the future. They could forget the knowledge or skill completely, or their understanding of the concept could become confused. In the workplace, this leads to poor performance, decision-making, and outcomes.

The jargon we sometimes use to refer to this in the e-learning industry is knowledge retention, i.e., a learner might successfully complete a course today, but will they retain the knowledge in one, three, or six months?

The objective of overlearning is to ensure the learner does retain the information over the long-term.

The cliché practice makes perfect is relevant in this situation, particularly as we look for examples of overlearning.

There are many good examples of overlearning in sports, so that is a good place to start. One of the most explicit comes from American Football.

This was in a game between the Atlanta Falcons and the Detroit Lions. It was close to the end of the game, and the Falcons were losing, but they had the ball close to the scoring area.

The problem was that there was still too much time left in the game. So, the team decided to go with a play that would NOT result in a score but would run the clock down. According to the plan, just as time was going to run out, they would score an easy kick to goal and win the game.

During the play, the ball ended up in the hands of running back Todd Gurley. All you need to know about running backs is that their job is to run as far as possible before being tackled. Gurley had been told not to score, but in the heat of battle, his muscle memory kicked in and he kept on running. His brain realised what was happening and he tried to stop his momentum, but it was too late – he scored.

And the result? The Falcons were now winning, but there was enough time on the clock for their opponents to score at the other end of the field, which they duly did.

So, in this example, muscle memory, achieved through thousands of hours of work on the practice field and in game conditions, was so powerful that it cost this American Football team a win.

Other Muscle Memory and Overlearning Examples

There are many other examples of the power of muscle memory and overlearning:

Applying the Concept of Overlearning to Your E-learning Courses

Here are some ways you can apply the concept of overlearning to your e-learning courses to improve outcomes.

The concept of overlearning can deliver real and lasting positive change in your business, from adding new skillsets to improving performance and productivity. The examples we see in sports and the arts can be translated to the workplace and will drive further improvements in the return on investment you achieve from training activities.